The 3rd edition of the ICM week, which ran from May 5th to May 11th, was busy and Info-Crime Montreal's management is painting a positive picture again this year.

The week that began May 5 at Place Vertu with an information booth gave place for 7 days many activities to increase the visibility of the organization directly in the field of Montreal island.

One of the most significant events was the traditional "Annual Lunch" with SPVM Director Sylvain Caron as guest of honor. Then, on Wednesday, May 8, a bicycle marking clinic with the long-time partner Sherlock antitheft marking and the PDQ 38 at Lafontaine Park, followed on Thursday by two sessions of '' A coffee with a police officer '' with the PDQ 11 in the morning and PDQ 27 in the afternoon. Then Friday, May 10, a historic moment, the unveiling of a visibility partnership with the STM followed by a prevention booth with the SPVM PDQ 50 at the Metro station Berri.

Thank you to all those who contributed to this great success and look in photos the highlights of the week. 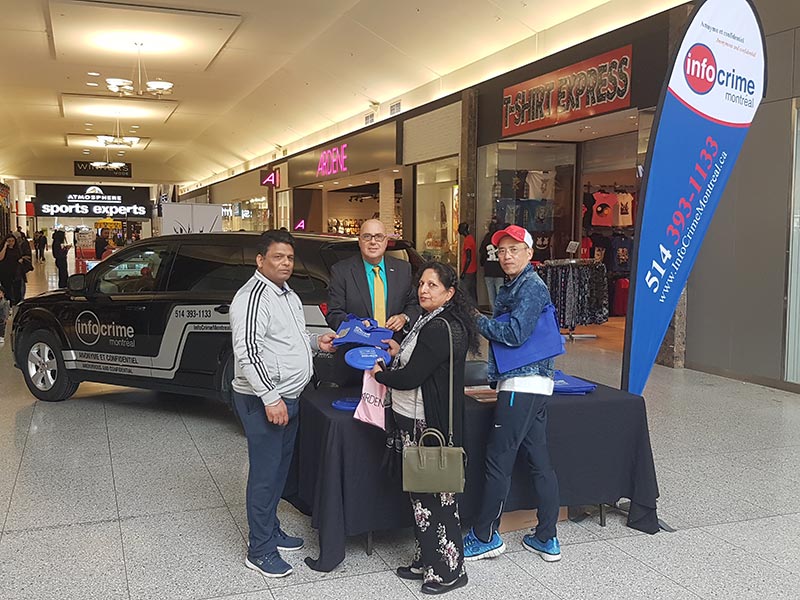 The 3rd edition of the ICM 2019 week started on May 5th at Place Vertu with an information kiosk for citizens with the official ICM vehicle.

On Tuesday, May 7, more than 150 people had traveled to the annual meeting, which recognizes the support of the many partners and police officers of the SPVM and which Sylvain Caron was the guest of honor.

In the photo, the director of the SPVM, Sylvain Caron is surrounded by the chairman of the board of ICM, André Drolet and Jean Touchette, the president and CEO of the organization. 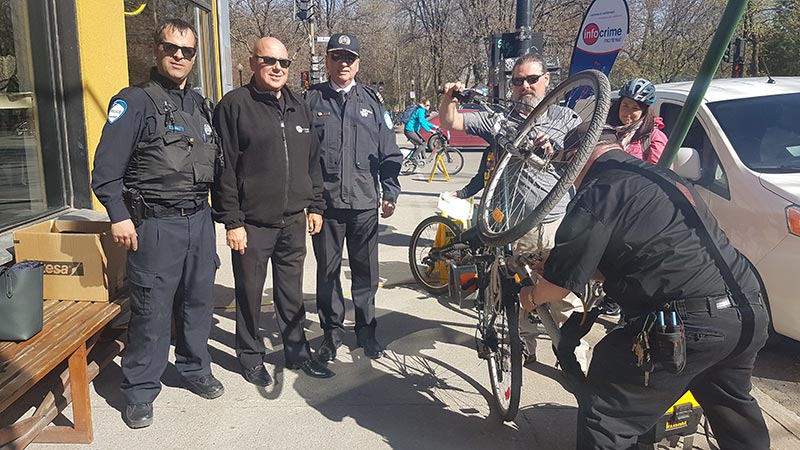 In the middle of the week, a bicycle marking clinic was held at Lafontaine Park as part of the Numéro project and SPVM police officers in collaboration with our partner Sherlock. 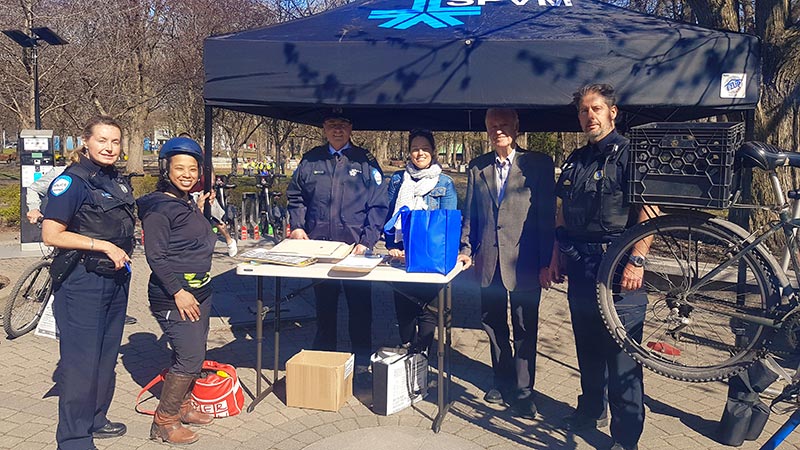 The marking session, which was held between 3 pm and 7 pm, gave the chance to 80 people to mark their bike that day.

In the photo, a Montreal citizen poses at the registration booth in the presence of SPVM agents, Lina Borremans, Luc Marticotte as well as Inspector Pierre Liboiron, from Sherlock Anne-Marie Jodoin and André Drolet, our Chairman of the Board. 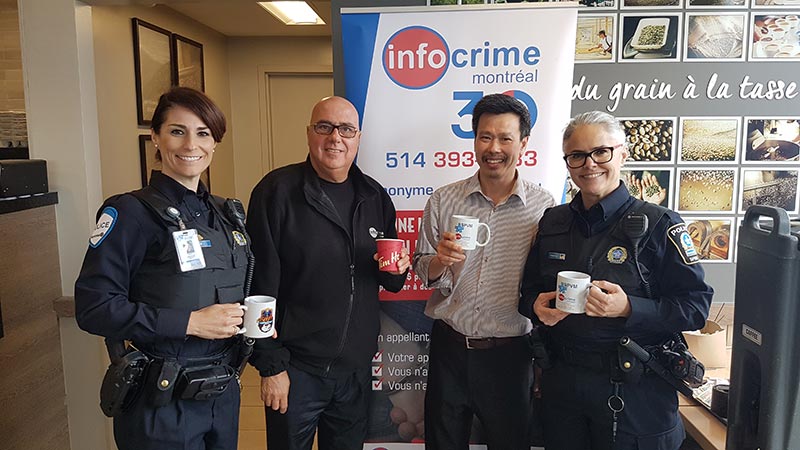 Our ICM / SPVM day "Coffee with a police officer" that started at 9am in the PDQ 11 area at Tim Horton located at 6995 St-Jacques Street in NDG.

In the picture, social-community agents Isabelle Dubé and Claire Parkinson, as well as Jean Touchette of ICM are in the company of Tim's owner who generously offered coffee to the citizens for the occasion. 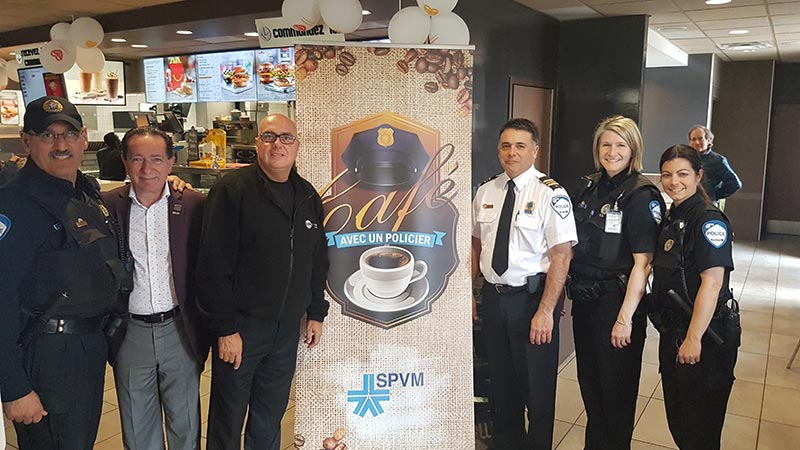 In the afternoon the session was held between 13h and 15h in the area of ​​the PDQ 27 in Ahuntsic at McDonald's restaurant located on Lajeunesse street near Fleury. 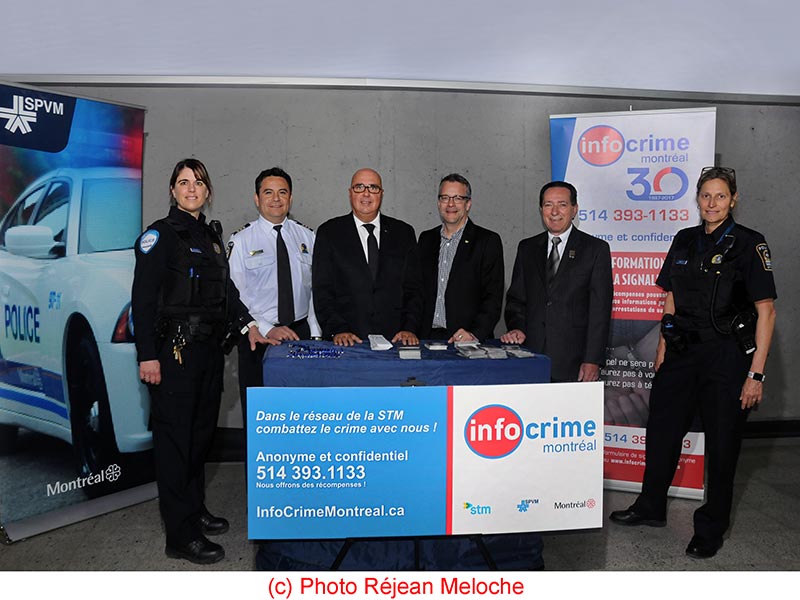 Friday, May 10 marked the unveiling at the Berri Metro station of a partnership with the STM for a visibility campaign deployed in June, followed by a prevention session with the PDQ 50 on the station's dock on the Green Line direction Angrignon. 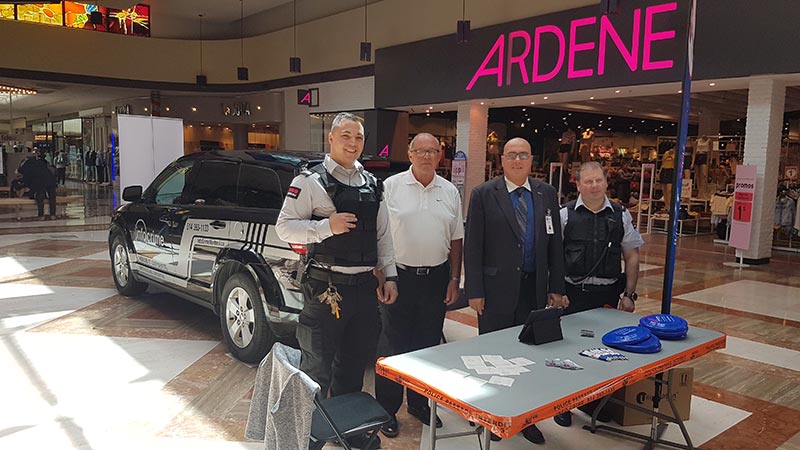 The ICM week ended at Place Versailles with another information booth with the citizens, in the photo, center left, André Turcotte instigator of the "Week" and Jean Touchette are surrounded by security guards from the center that generously supported the event.