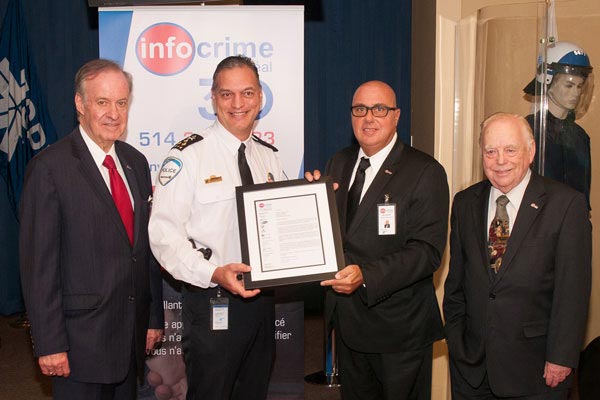 The leadership of Info-Crime Montreal highlighted the 30th anniversary of the program during a press conference at the quartier général of the SÉPVM.

For the occasion, the management of ICM took the opportunity to present a souvenir certificate to the director of the SPVM, Philippe Pichet, to recognize the historic collaboration of 30 years.Founded in 1987 by Messrs. Alex Harper and the late Roland Bourget, former chief of the Montreal Urban Community Police (now the SPVM) Info-Crime Montreal is still active in the daily life of citizens who seek to contribute to improve the quality of life of Montrealers. At the outset, the telephone number 514 393-1133 was new to the population and the media. A true vision of the future had been seen by these two men to help in solving crimes.

Today, 30 years later, it is clear that the technology has changed significantly, with the arrival of the Internet and in particular our form for providing information on line. One thing has not changed, however and will never change : our main mission, which is to encourage citizens to help in the fight against crime by providing information anonymously and confidentially with respect to criminal activities.

Info-Crime Montreal has succeeded in the exercising of its functions over all of these years thanks to a combination of three elements, namely the participation of the media, the police and, of course, the general public. In 2017, Info-Crime Montreal is extremely proud to also support a variety of prevention programs, many of which were put in place by the SPVM. It is clear that the Police Service of the City of Montreal has played a key role in the growth of the organization up to the present time. The results and rewards are obvious.

Since the launching of the program in 1987, ICM has received thousands of calls which have provided information which has permitted to more quickly advance investigations, thus leading to the arrest of criminals and fugitives. One of these was the case of the spectacular arrest of murderer Raynald Létourneau which was the result of information received by Info-Crime Montreal. In addition, the program has remitted thousands of dollars to citizens through its rewards system which is designed to encourage the collaboration of the public.

Volunteers and presidents who have assured the sustainability of the program

Throughout the year, to highlight this historic moment in the organization’s history, we will be increasing our activities on the ground including this year’s launch Info-Crime Montreal Week which will take place from May 7 to 13, including, in particular, the launching of our Facebook page and the new version of our web site. Finally, to close the anniversary year we will have the 30th anniversary banquet which will take place on October 26 next under the honorary presidency of Mr. William Bumbray, retired police officer who was a key ambassador of the program at the outset and who made an indelible mark on the history of Info-Crime Montreal.

In terminating, Info-Crime Montreal means a call for self-respect. Help us to continue our mission by spreading the message, by calling 514 393-1133 or by visiting our web site at www.infoCrimeMontreal.ca.