Signature of Golden Book of the City of Montreal

At the invitation of Madame Anie Samson, Vice-Chairman of the Executive Committee responsible for public security and services to the citizens, the leaders of Info-Crime Montreal highlighted the 30th anniversary of their organization during a visit to Montreal City Hall.

For the occasion, the directors of ICM had the pleasure of signing the City’s Golden Book and took advantage of the event to present a souvenir certificate to Mayor Denis Coderre to recognize this historic moment and also to celebrate the inauguration of Info-Crime Week in Montreal, which takes place for the first time from May 7 to 13.

“Since its founding, the mission of Info-Crime Montreal has been to encourage citizens to fight against criminality. I am proud to recognize these 30 years of collaboration between the general public, the media, the SPVM, the City of Montreal, the Department of Justice as well as the corporate partners in this vast movement of solidarity and justice. I also wish to salute the commitment of Info-Crime Montreal to make our metropolis a more secure city for Montrealers,” declared Anie Samson. 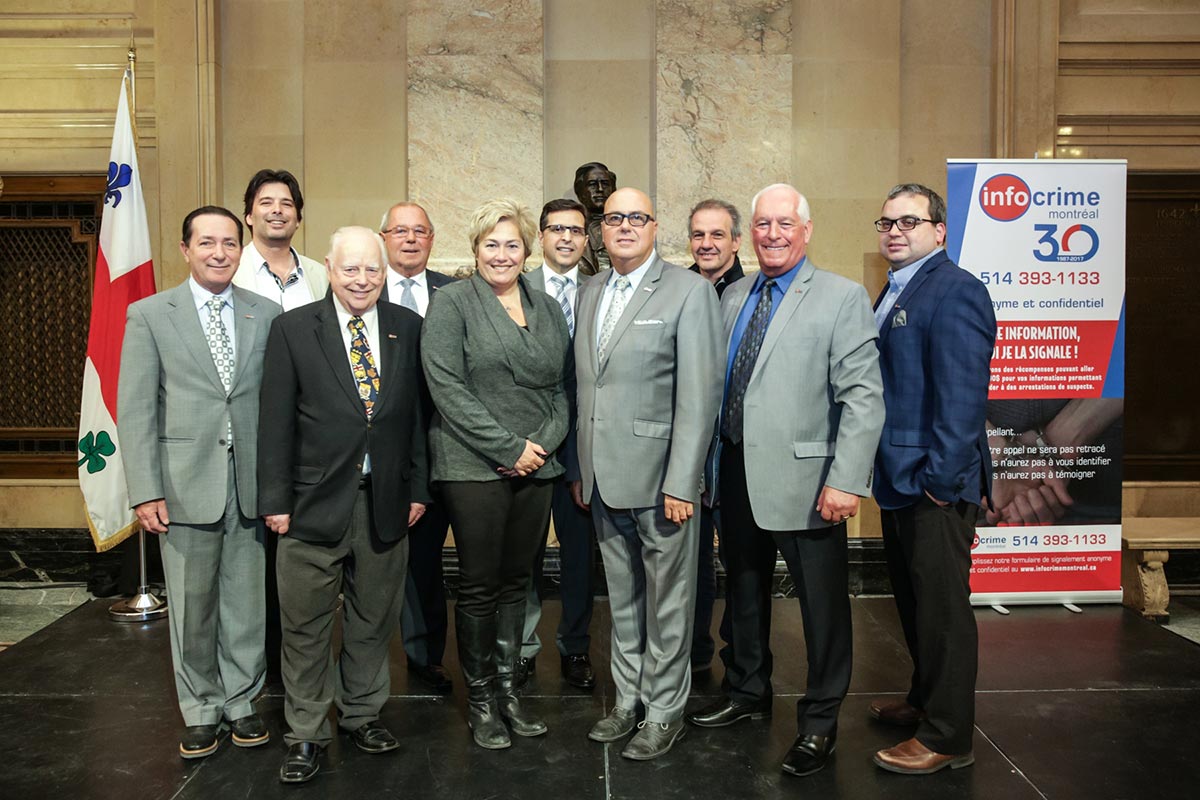 Founded in 1987 by Messrs. Alex Harper and the late Roland Bourget, former chief of the Montreal Urban Community Police (now known as the SPVM), Info-Crime Montreal is still active in the daily lives of citizens who wish to contribute to improving the quality of life of Montrealers. At the time, the telephone number 514 393-1133 was new to the population and the media. These two men truly had a vision of the future in efforts to help solve crimes.

ICM / City of Montreal : a winning and efficient partnership

Since the launch of the program in 1987, ICM has received thousands of calls with information that have helped to speed up hundreds of investigations move forward more quickly, resulting in financial savings for the police. For example, the recent arrest of Patrick Dinucci in Italy where Info-Crime once again contributed by providing on several occasions information which was complementary to that possessed by the police during the process of the investigation.

The creation of Info-Crime Week in Montreal

Throughout the year, to highlight our 30 years, we will multiply our activities in the field and to do this we are very happy to launch for the first time “Info-Crime Week in Montreal” which will take place from May 7 to 13 and will include several events. Among these will be information booths at Place Versailles and Place Vertu, in the Montreal North Borough, a visit to various media and the launch of our new Internet site and a Facebook page.

Finally, to close our anniversary year we will have a 30th anniversary banquet which will take place on October 26 next under the Honorary Chairmanship of Mr. William Bumbray, retired member of the Montreal Police, who was a great ambassador for the program at the outset and who left a clear mark on the history of Info-Crime Montreal.

Info-Crime means a call for self-respect. Help us to continue our mission by spreading this message, by calling us 514 393-1133 or by visiting our web site at www.infoCrimeMontreal.ca